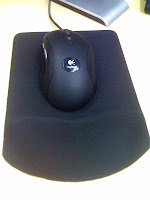 I've been wishing to have a PC as my main machine at home. The iMac takes over my small "computer desk" (ugly invention, silly me for buying one) and yet it can't run Picasa 3.
Google has been promising Picasa for OS X for a while now.. and in the meantime a new version for PC came out.
Picasa 3 adds a very important feature for me: the ability to sync changes to the online albums over at PicasaWeb (though, I haven't actually tried to do it).

It's easier to appreciate Picasa once one has to deal with iPhoto, the usual Apple-Way kind of software that came preinstalled on the iMac. iPhoto will allow to keep pictures in their original folders but when one retouches a picture (color correction is usually necessary, see the picture in this post !), the edited picture ends up in some application folder somewhere, practically forcing me to have to find every single retouched picture to replace the original one in the original directory.

Programs like Picasa are the sort of killer apps that will drive people back to Windows one at the time. My frustration is growing every day, and what keeps me back is only the ridiculous prices of the more powerful Vaio notebooks or the thought of having to fight with preinstalled crapware and drivers the day that I want to reinstall the OS.

Every company seems to make its best to annoy users with complications, locks, copyrights and whatnot.

P.S. The picture is my new mouse and mouse pad that I bought to use in the office. The standard mouse was just not up to its task. Though it was a laser mouse (yes, many new machine still come with ball mouses !), it would still act weird from time to time, and the scroll wheel was too noisy.. ..important details !!
-- Davide - 2:38 AM