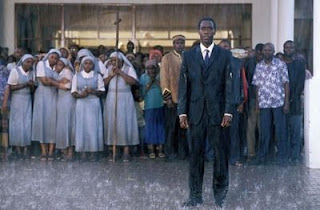 The other day I finally saw the movie Hotel Rwanda. I liked it and I think it serves a great purpose. It's one of those movies that should be part of everyone's format education.
Today my CNN channel (CNN Japan/International) showed a special about Rwanda and Darfur genocides. The report is called Scream Bloody Murder.
Recently I also watched a TED talk on the topic, titled Shaking hands with the devil.

The general idea is that some poor African country reaches some peak of violence, escalating to the point in which people start killing civilians, women, children. And not just killing, but dismembering, torturing, raping.
I've heard a story of a woman that survived the Rwanda genocide. Her children killed, chopped and cooked in front of her. Can it get anymore evil ?

Humans are scary. They can turn into senseless monsters, anyone can.. especially those born and raised in poor and violent countries, where the situation is already bad enough.

Intervening is a bit tricky. The general public from the rich counties is too busy worrying about everyday life issues. You hear it in the news maybe.. but it's just numbers, or some images, usually not so terrible... but generally served with some cold report.. moving on..
The leaders of the countries that could do something are afraid to get stuck into some mess.. like getting own soldiers killed, and prefer to look away. Some others downright try to prevent action because of direct interests.

So, where does all this lead to ? ...The positive conclusion is that people just don't give a crap. But, more realistically, people need terrible things to happen to spice up their lives, to have an history worth living.

Why not ? Why should we care ? We are not there.. 800,000 people are murdered and I'm upset because have a sore throat and runny nose.
And it does make sense, one cannot expect people that are not directly involved to truly feel the urgency of the problem.

Human pretty much agree that killing is wrong. But that's hard to enforce basic human laws for individuals living far away.
Genocide is however something so big that should be stopped no matter what political and physical boundary. For that, there should be a hard rule, where no matter the circumstances, everyone (the UN for example) must intervene to stop the killing process. Perhaps with consequences for those that don't intervene.

I say hard rule to mean something that should require little or no debate. If every time we have to think about intervention, then it's never going to happen.
-- Davide - 10:59 PM