Can you write Pixar ?

The first week of work after the holidays is over and I have some updates on RibTools, or I should say RibRender, because that's really what is becoming of it.

I finally implemented all the quadrics necessary to get the geometry of the Pixar.rib test file to render properly. 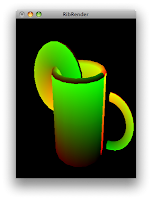 I also got another basic file (SimpleMug.rib) to render. It would need a disk primitive to be complete, but I'm just too lazy to implement something as simple right now !
Notice that the disk-looking shape is actually not a disk.. so where is the disk needed ? Not sure 8)

Incidentally, I'm also very busy at work !! There are some features I have to code in, and a lot of profiling and optimization that has been neglected for far too long.

It's a bit sad to think that I could probably get double the frame rate if only I had more time to optimize... but it's also important to avoid putting too much effort in custom optimizations. I can either do some clever DX 10 optimizations or I can play with RenderMan files and experiment with more innovative ways of rendering (the latter is something I do at home, but it will ultimately become useful for work, too).

It's so much easier to write code that doesn't require any particular optimizations.. now I'm at the point in which I really need to start thinking something clever for some specific cases.. though the overall result is already looking great.
In fact, we truly are getting close to off-line rendering at "interactive frame rate". However real-time is never really real-time.
Where does the pre-processing stop and interactive rendering start is a blurred concept. Real-time 3D is only possible because of some heavy pre-calculations.. be those some form of light baking, or even just batching together triangles with the same material, or resizing a texture...

Speaking of blurred concepts.. high quality motion blur and depth of field are still a problem.. especially motion blur, which is such a key element, one of those things that are somewhat subliminal and therefore getting less importance (at least in the real-time programming world).