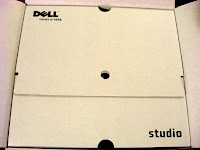 A couple of days ago I received a new PC that I ordered to use as a home server.

It has a 4 cores CPU, 4 GB of RAM and Vista 64 bit Ultimate (went for Ultimate so that I can choose English language UI on top of the standard Japanese language).

It's a Dell (dude !).. and now I don't see much of a point in keeping the iMac around (also considering that I own a newer MacBook).

It's funny, it's become so easy to switch from PC to Mac.. and even easier to switch back again 8)
..all major software is on both systems, and Vista runs fine with recent drivers and beefy hardware.. not to mention the web application from Google that all run with pretty much any browser.

What I really prefer on the PC side is, as I mentioned before, Visual Studio.

Soon there will be an Apple developer conference in San Francisco.
I glanced at the list of sessions, and it would be interesting to follow a few of them to get started with Mac development.. but I don't have that luxury, and I somehow doubt that all those classes and courses will make me rethink on the goodness of Xcode compared to Visual Studio.

Of OS X I also don't like the GUI so much. It's too busy.. gone is the time when I'd dream of more colorful and 3D-ish GUIs. Now I just want plain windows that I can maximize, work spaces that allow me to dock sub-windows. I even disable the fancy Aero thing from Vista (it's rather tacky and distracting !).

I like the fact that file dialogs are intelligent.. you can drop files in them and they'll switch to that folder. But then there are things like having to actually quit an application that doesn't have any windows open ! I find that to be a rather stubborn and stupid convention. I'm pretty sure that all newbies end up with many applications open without realizing it..

A major problem is usually data transfer. But, this is not really a problem since I learned to keep all my data into 2 folders that I share between computers with Windows Live Sync.
One folder with generic stuff that I've accumulated in the years (trying to keep it lean).. about 18 GB, the other for all pictures and small videos, which is about 32 GB.
Windows Live Sync works really well. It's free and it relies on me keeping my data.. no "cloud space rental". kind of thing.
It works like a charm and makes no distinction between Mac or PC.
The only problem I had is the limit to 20,000 files per folder.. thus then need to split my stuff into 2 folders.

Operative systems are a pain anyway.. they aren't so important anymore. Linux is always great for servers without having to pay a Microsoft tax, and if one doesn't want to rely on closed source.  ...but as a user I don't really see too much advantage in OS X anymore.