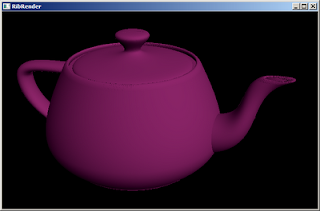 As some may have noticed, this blog also shows the RSS feed of the RibTools project.. commits comments say little but are certainly more frequent than blog posts.
Twitter to me also seems like version control commit comments. I sort of use it that way, makes sense. I also like the fact that unlike instant messengers it doesn't have to be instantaneous, so it's not as distracting (though it's public by default 8)

The renderer/shader portion of the code then will simply use VecSIMDf, and process data in chunks of appropriate size.
A VecSIMDf is actually seen as a scalar, and a Vec3xSIMDf is what one would consider a 3D vector.
In fact, the shader has its types defined as such:


Right now I can just change a define and decide to compile either plain C++ (thought the compiler may add SSE instructions of its own), SSE or LRNni.

I did a few tests and, unsurprisingly, SSE is the fastest by far.
The test is rendering a teapot at full screen (1600x1200 minus my right side task bar), and here are the results.


..ummummm still more places can be optimized. But for now I should switch to work on light shaders.
-- Davide - 9:10 PM