Today I had a pretty boring 2-hours meeting.

A lot of beef, about some new company strategy about game development. Some very intense slides ! Incredibly cluttered graphs, timelines, concepts.. it was like some C++ program made by some BOOST-pair-programmer kind of nut, only all done with PowerPoint. A matrix inside an hypercube all flattened in 2D.

I took the opportunity to look up on the electronic dictionary Japanese words that I didn't know (there is plenty (^^;)) ..and also to make some crazy drawings which some day I'll have to scan for everyone's enjoyment (just like in high school ! ..minus the scanner)

The meeting was pretty dull to me, but I appreciate the effort that the company is making to improve productivity of game dev... though it just sounds so cold, and bureaucratic.

While attending the meeting, the friendly HW guys were replacing my main PC's NVidia 8800 Ultra with some recent ATI/AMD card.
I already have a more powerful PC with a newer NVidia, but I needed an ATI to try fix those far plane clipping issues without having to BSOD myself to a nervous breakdown !!
..It'll be fun if the ATI card comes out having the same bad-sad system crash problem 8)

The ATI card seems rather fast ! However it gets stuck from time to time..  I'm doing some heavy data streaming (upload) into the card.. reaching even 48 MB per frame !
NVidia so far seems to handle that better... but then, the 280 chokes on heavy D3D10 vertex buffer releases, more than the older 8800 ! In fact, for the 280 alone I had to implement some sort of garbage collection of the D3D buffers.
The app releases vertex buffers at will, but I built a thin layer on top of D3D10 to really release those buffers in small, edible batches per-frame.

I hate having to work around different kind of drivers like this. Direct 3D is clearly far from direct... which is nice, until one gets serious with graphics.. at that point stuff gets so complex that the facilities that the API offers become more trouble than worth.

Of course it's not so easy to replace drivers and APIs nowadays.. we all use shaders and rolling your own shading system is no joke (still working on the compiler BTW).

On related (?) news NVidia is giving away anaglyph Red & Blue lens glasses with their new cards...  are they nuts ?! Somebody in the company maybe wore those as a joke, but kept them on long enough to get color drunk, and from there the epidemic spread into marketing. 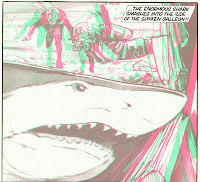