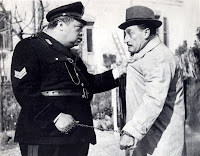 It's amazing how social heirarchies get people to do terrible things to each other.

Some time ago I saw a TED Talk from Philip Zimbardo ..where my take was that people can be basically manipulated to do anything.

This is happening in Iran these days. I wouldn't say that best friends are pitted against each other, but more like two extremes have the opportunity to confront each other (though one side is clearly more extreme).

Funny also how people that are the police will just do something wrong even if it's so obviously wrong.
I guess rules are important.. and if one starts disobeying orders, then who's going to hold things together ? But more often than not, police turns evil at the first chance.

It shouldn't come as a surprise.. to be a military person or a policeman, one does have to have some tendency to be barked on from above and to follow orders.. even if they are bad..
Maybe sometimes people would like to rebel, but they are afraid that others won't follow and just make normality out of something messy. Many journalists are willing to spin some impossible propaganda.. and one doesn't even have to go to Iran for that, Italy is a good example too 8)

I would like to see myself in those kind of situations. Would I turn evil ? I think anything is possible ! But for the way I am, I would really have to go through some artful brainwash.. to sell whatever integrity for some money, for a pat on the back from someone that is powerful.


I remember a documentary about Rwanda where a Tutsi woman meets a Hutu man that in 1994 was her neighbor and that at the time he supposedly killed her family (the documentary was a bit vague, I'm assuming he really didn't specifically kill her family, though some other Hutu clearly did). They were not angry at each other.. he was very much like "sorrryy.. you know..".

When it comes down to people.. really anything goes.. humanity isn't even in beta..

Email ThisBlogThis!Share to TwitterShare to FacebookShare to Pinterest
Labels: society