Recently I've been meaning to update the blog, but when I think of what I'd like to write I'm probably in the shower, or walking to or from work.

In the office I generally don't have time to update the blog.
But, more than time, it really comes down to environment.. if one can find those 10-20 minutes to sit down without any interferences and write something down.
..speaking of which.. there is an internal R&D blog in my company and today I dediced to post there a message/complain about the frequent noisy meetings at the open-space meeting room. Place that happens to be near my desk and that today was extremely active with some meeting-happy individuals that seem to have little actual work to do. 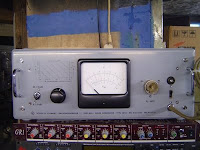 I decided to write on the blog about the noise level.. because when I reported the issue to my superiors, nothing really happened, and it seems to me that to really change things sometimes one just has to make something public.. and then people have to take notice.

The R&D blog is usually about general factoids, quick reports from people going to conventions, news.. but to me it's more like a place to get real about the work situation.

..notice that up until now I actually tried several things to reduce the noise. Including earphone + noise cancelling headphones, ear muffs and ear plugs meant for F1 racing.. but some meetings are just too noisy !
You can tone down the volume, but voices and laughters will not be removed. I think at some level noise just gets in from the cheek bones, nostrils, anything. And then a person talking becomes a whisper, which is not very pleasant 8)

I think that concentration is a very important factor for people that use their brain in a certain way (that use it for real ;). Not all jobs require the same degree of concentration.. and I guess, some programmers can afford to spend several hours in meetings, cracking up about anything that smells like a joke.. and I suspect that they aren't really doing their job. But that's another topic..

One thing that bugs me is how some Japanese themselves can be so insensitive.. I mean, there is this unwritten rule about not speaking out loud in almost any occasion, the train, the elevator, etc.
People are constantly reminded with posters in the subways that there are other people around to mind about. I remember one of my first Japanese language comic book was actually a manners book for kids !

I suppose that all this education can't work for 100% of the people and perhaps we may need a poster with some cute animals that reminds people in the open-space meeting room that there are other people around that are trying to do their work.
It's possible that people that laugh out loud during meetings just have no idea that they are bringing discomfort to those that are around. I have to give the benefit of the doubt.

Kindness however is a double edged sword as it also prevents some from complaining.. so, while many are bothered by the noise, I end up being the one that speaks out.. the complainer, the unkind ! This is expecially true for the Japanese coworkers, as they are very resilient and afraid to bring out negative sentiments. But also the non-Jpanaese coworkers either don't care too much or just don't want to make a fuzz about it.

Well, I think it should be pretty basic that a programmer or a graphic designer (musicians surely already have their own room already) should be able to work in a place that is relatively quiet.. it's a human thing !