For a while now, my Super Drama (actual name) cable channel has been pushing "Terminator: The Sarah Connor Chronicles". Whole 30 minutes of promotion at the time.. relentlessly.
Eventually the show started and I was already tired of it. Here are a few things that turned me off: 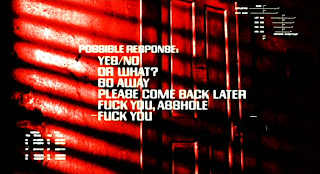 - The main guy is annoying. Supposedly, some teenager but with the face of a small adult.

- The main woman (Lena Headey mother of the main guy) was a sexy beauty in the movie "300".. here she looks aged and with all sort of facial asymmetries showing up (not her fault, but what a shame).

- Extra added yucky effect by the fact that the small-adult-looking guy, in an interview, says he's best buddies with the Lena Headey and how they talk long hours on the phone and go shopping together.. ewww !!

- The terminator gal has been wearing thigh highs. I'm a fan of that type of stockings, but in Tokyo where they actually happen. In a serial TV based in LA it looks very unrealistic and very much as a device to get younger audience to jerk off over the show (better off downloading more explicit material..).

- The episode where mom-woman goes to buy a cell phone, and magically meets a store dude that happens to be some computer genius that has built some revolutionary AI hooking up together a few XBoxes and Playstations... ..store clerks revenge ! ..and she burns down his house to save the world: "intelligent computers baaaddd !" ..bitch ! 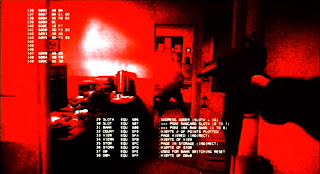 In general. I think of TV shows as the tap water of fiction. "Terminator: The Sarah.. etc etc" is very much tap water.. though Terminator 4 didn't seem like pure mineral water either !

Whatever the critical reception, I call BS on this one.. but then again, the last serial TV that was worth watching for me was Miami Vice (on Wikipedia and IMDB). Much of the rest can be entertaining, but ultimately, pretty sad.

P.S. I included pictures form the HUD display of the first Terminator movie, because they seem more inspired and are actually fun.. the last one has some sort of assembly instructions showing.. very robot-like.. much more meaningful than those gay TV shows made by hundreds of people, none of which has any idea of what machine language is ! Java generation !!!
-- Davide - 6:06 AM