I just can't seem to find the time to update the blog.
With Twitter well established for micro-blogging (I'm here ! -> twitter.com/109mae), I find it harder to sit down for 30 minutes or an hour to write a proper log entry.

I think about what to write while in the shower in the morning, in the train, but once I'm home, I have other things to do, other distractions. Often, I really wish I could spend more time alone ! 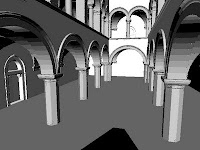 The network system seems to work well, though I tried it at most with 3 computers and the performance is overall slower than just one computer focusing on rendering a scene.
There are obviously many latency bottlenecks that invalidate the usefulness of the network distributed rendering. But this will have to be sorted out in a profiling phase, with complex enough scenes to render. The important thing for now is that the job dispatch and result retrieval is reliable.
I also fixed a few serious inefficiencies, memory leaks and I partially implemented another polygons primitive(one that can specify concave polygons with holes.. I support them as long as they aren't concave and have no holes 8) ..I might decide to implement all that only once I get some cool scene that uses them).

I changed a few things and I actually got a binary distribution going for RibTools. It's a "featured" download, automatically placed in a green box at the right of the project page over at Google Project Hosting.

I also got around writing some basic instructions, a batch file to render the test files.. a lot of small things that need to be done to render a project minimally interesting to anybody other than myself 8)

I've been toying around with Vim and EMacs... mostly looking into Vim. I tried the ViEmu for Visual Studio. Also checking out again the video "7 Habits For Effective Text Editing" from the creator of Vim (which incidentally has a slight Dutch accent that makes him sound a bit like Goldmember like the homonimous movie 8).
The video is entertaining but a bit long, the web reference can be found here. Though the PDF presentation is probably from 7 years ago.

A couple of days ago I had some terrible pain on my right arm, and that's probably because of mouse usage. I hate how long keyboards are.. I could definitely lose the numeric keypad and save myself a lot of traveling to catch the mouse every time.

I also tried the Vimperator plugin for Firefox. It's a bit too hard core at times (by default removes your menu bar !), but I like navigating with the h,j,k,l keys instead of using cursor keys (in VI/Vim 'h' = left arrow, 'j' = down arrow, 'k' = up arrow, 'l' = right arrow), and I like the idea of selecting a link with the keyboard.
One presses 'f', and small numbers appear around each link. Type the number and jump to that link !

I started liking using the VI keys as cursor keys and I decided to extend the thing everywhere. I got the AutoHotKey utility and mapped ALT+h,j,k,l to emulate cursor movements. I also extended the thing to use CapsLock+h,j,k,l for Home, PageDown, PageUp, End keys.
There are a lot of possibilities there.. the only problem is that the more one customizes things, the more idiosyncrasies will come up later on.