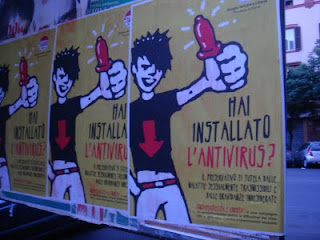 It's Thursday night (and Friday morning).. I was back to work today.

..a lot more relaxing than my Roman holiday..  but also stressful in different ways.
I haven't had much time to do my home coding recently and now I'm growing worried.

..it's a jungle out there and one can get by only if he works his ass off or if he's a poser. I could never be a poser so I have to work my ass off 8)

..working in the office is not enough though. I knew that all along, but every now and then a reminder comes in. For all the respect that one gets for spending long hours and coping with crazy milestones, there is going to be a point where one has to fight again with his teeth to keep the career going, to get the proper recognition again and again.

For this reason, it's always good to keep a certain degree of independence. This may be less of an issue in the US, where cool game studios are constantly appearing (and shutting down (^^;)) ..but in Japan, it might be that I'm out of touch with game products and companies, but it doesn't seem so easy to jump around jobs...  though the work visa here is not tied to a specific company, so a foreigner doesn't have to go thought legal hassles and various lotteries just to change employer.

A string of holidays is coming up and I'm going to finally turn into coding mode. It's an investment for my near future..  ..it's not just a hobby or a passion, it's also a matter of survival !

Sometimes I think I should take a year off and live on savings, just programming what I mean, to prove what I think, without having to beg for attention left and right.
Or maybe I should start working just the barely minimum and the hell with over achieving for corporate machines where individuality and passion are hairy inconvenients.