I've successfully reached the insomnia level. After working for so long until the morning and sleeping in the afternoon... and today, finally, after being so deep into the racing game that I'm developing.. I went to try to sleep by 7 AM and I couldn't.
The worst part is that I kept thinking of the game.. stuff to add next and to keep myself motivated on the graphics authoring department. 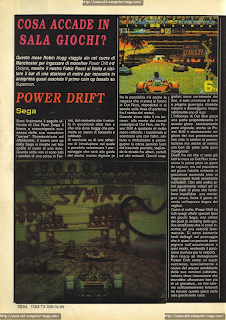 This is so very much like 20+ years ago, when I used to spend my summer vacations in front of my Amiga 1000, working some game demos code.
Half of the time would be on optimizing code (often where it wasn't needed 8P), the other half was on doing pixel graphics with Deluxe Paint, copying from video shots of After Burner and Power Drift on some game magazines.
I still have some floppies with possibly some of that stuff.. but they are superold and I don't have an Amiga anymore. I could buy some Amiga in Akihabara, but then I'm afraid that the floppies would just pulverize inside 8)

ahhhh.. yeah, I should go to Akihabara and finally get me an Amiga !

Anyhow, the game is progressing well. I've even found a name for it (Final Freeway anyone ?!), and made the credits screen.
I also added a demo-mode, but it looks pretty dumb without any sort of AI.. and I'm too lazy to implement something that is based on actual gameplay recording.

I'm not so sure about the "art"... cutting images with Photoshop (Paint.net) only works so well.. the game is obviously retro, and doesn't benefit for any photo-realistic graphics slapped in.. which is gross much like Mortal Kombat was gross (at least to me !).

Anyhow.. I hope that my lack of sleep won't make me do anything stupid such as buying an Amiga ;P

poofff
P.S. Thanks to http://www.old-computer-mags.com for the TGM Italia scan about the article on Power Drift.. however their Java viewer stinks.. it's very slow and it doesn't resize. I may be wrong but.. I suspect that it was made that way so that other couldn't "steal" their scans... typical Italian mentality ;)
-- Davide - 11:51 AM