Android: so far, not so good 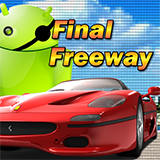 On December the 19th, Final Freeway for Android was finally released.

I personally didn't work much on this edition, though I did my share of work to adapt the game for some needs of the new platform and to post a proper press release this time around.

The press release was quickly picked by a few sites and on December 20th, we had a 53 sales.
These relatively high sales were probably because the game was in the list of the new releases. Things are not so good now, where sales average to 10 copies per day.

I can see the problems with Android as a viable platform. It has been discussed more than once. So, I'll try to cut it short..

Piracy is really bad
A lot has been said about piracy and I personally agree that one should not count one download as one theft. I understand that people want to try a product and that sometimes costs are prohibitive. But all that downloading activity is certainly not bringing any business to us.. and the game costs $1.25  ..if you don't have a dollar, you don't have a smart phone.
Overall, I'd say that the whole Android apps ecosystem is fucked. Google loves to play the card of the friendly, open company that doesn't lock phones.. but while doing that, it doesn't propose a compelling market experience for the users nor an healthy market for the developers.
It's too early to make a final judgement, but I have to say that so far things are pretty bad. We sold 152 copies in one week, and now average to 10 copies per day.
But the game is not bad. It sold on tens of thousands of copies in the App Store with little or no publicity (not even a press release) and 4 months after the initial release, it still sells about 130 copies per day.
Our multi-platform framework is there, and porting new games to Android would be much easier now... but if things don't change, I'll not bother porting new titles to Android even if that only meant to recompile the code, because supporting a piracy-laden platform is bad for the mobile market as a whole.
..while I'm still hoping for a break.. at least to repay the basic cost of porting the game.
wooo !
-- Davide - 12:16 PM