Since the last post, a few things have changed for me 8)

I'm now in Rome since couple of days ago.
Previously I was in Osaka, where I stayed while waiting for a flight out of Japan.

A big quake rocked the north-east part of Japan and it was definitely felt in Tokyo.
That went well for me, as I came out only with a few broken dishes and cups, and a big scare.
Right after the big and long shake I mailed my relatives to let them know that I was fine.

What happened later however proved to be more unnerving.
As aftershocks (some of them quite strong) kept going every 30 minutes, the nuclear power plant in Fukushima started misbehaving.
Problems got visibly worse, day after day, and I eventually decided to leave Tokyo. 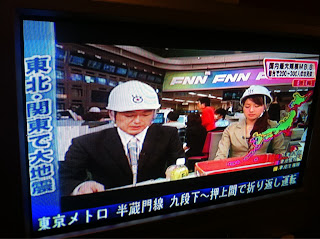 I tried to be calm and rational for a few days, hoping for the power plant to improve, while trying to keep my relatives calm.
The foreign media did and is doing a disservice by overblowing the situation in Tokyo.. and in the end I just couldn't counter the power that the media reports had on my relatives and friends, which were all very worried for me.

The reason why I ultimately decided to leave Tokyo however was based on the Japanese media reports.
The periodic press conference kept bringing more and more bad news.. and it was clear that the people in charge had no idea of what was going to happen next.
That, added to the fact that TEPCO, the energy company that owns the power plant, is famous for its lack in of security and its willingness to cover up its wrong doings, gave me more than one reason to stop trying to hope for things to suddenly get better.

So, I left Tokyo and I can finally relax now, but only partly, as my home is still there, and I need to think forward for when I'll be moving back in in a month or so.

One thing that has been bugging me is the reaction of some people to all this. There is who considers people that left as weaklings that can't take a little heat, people that leave in the moment of need.
Those are the foreigner macho types that feel that flying away is a bit like betraying the country.
That would make sense if it weren't for the fact that, there is really nothing I can do by being in Tokyo, other than using up the electric power that is now so scarce.
Also some Japanese friends of mine did exactly the same thing, by moving at least their wife and kids to the south of Japan if not outside of the country altogether. In fact, I'd argue that Japanese have a better view of things, because they had their TECPO-moments in the past, and know how little transparent the company is.

Given the situation, between the aftershocks, some power cuts and the nuclear power plant. Some Japanese employers went form giving a week vacation to rent hotel rooms, or rent office space to the south of Japan (mostly Kyoto and Osaka), where things are a lot calmer now.
Unfortunately, some other employers were rather evil and put pressure on people to stick around. My girlfriend had only 2 more weeks of employment left with her company, and she was told by her female boss that "she was like a soldier leaving in times of war"... eheheh give me a break, bitch !

Luckily, my position as an independent gave me complete freedom, and that's definitely nice. Would I be in the middle of some game project being a lead or something like that, the pressure to keep going would have been stronger.
As an employee, there is often this pressure to get things done which pushes one to work later hours, as if making games was really a matter of life and death.. bha !

Another movement that sparked from the whole situation, is that of the science-oriente pro-nuclear people. I suspect that most of those people are generally used to think of themselves as better informed in matters of science, and react to the overblown drama reported by the foreign media, with strong arguments that severely downplay the gravity of the situation.

I'm definitely someone that loves science, that's basically my religion.. but one has to be practical and accept the fact that nuclear power is much to intractable in the current state of things.

The "smarter than you" types, tend to come up with comparisons by which a banana gives you more radiations than this or that. And so, those that leave Tokyo are just "general populace", the average Joes that get scared for nothing.

Apologists will go as far as saying that in the grand scheme of things, nuclear power plants save lives. Save miners' lives, save the world from pollution, and so on and so forth.

I honestly think that what you see is what you get. This nuclear accident has been a big facking mess, and it's not just people's hysteria. It's a bad bad situation, with some sort of doomsday machine that went wrong at every step of the way and it's been very hard to tame... and we're talking about a power plant that has been turned off !

As I mentioned in another, instance, I think that any machine that doesn't have a real "off" switch, is inherently evil. And if something can go wrong, then it will go wrong. This is the mindset that every programmer learns to live with and it applies to everything.

I leave you with an interesting debate.

Does the world need nuclear energy?