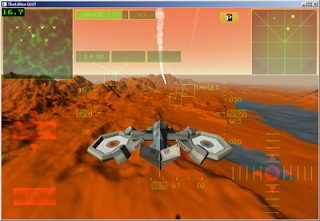 Development on the game code named The Fractal is proceeding.

As usual, there is so much more that could and should be done to have flawless reviews and mostly happy users (100% is impossible.. there will always be someone that hates the world on that day).

However this game is not going to cost more than $1.99 ..and the time put into the development has to be in line with the price.

I've spent the last couple of days to implement some sort of shadow mapping (see the dark dot at the bottom of the image). I finally got a projective shadow blob that, with some extra work, could be turned into a proper projective silhouette.. but, as I feared, the additional texture fetch required even for the simple blob (that operates on a whole terrain patch), is just too much.
I could try an alternative way, that only renders the shadow-enabled geometry around where I know that the shadow is going to be projected. But it's a lot of extra work for a hack.

So, basically, on iPhone 4 and iPad, the terrain must have nothing more than fog. No lighting, no nothing.. or else it's almost impossible to run at 30 fps.
There are more general optimizations that can be done.. but there is no guarantee that that will help, and I may leave after the initial release.
It was good nonetheless to have the basics of shadow mapping implemented in the engine, just like the dynamic terrain lighting that I added during my vacation in Italy. Those are extra features that I can eventually enable on devices with enough power. Hopefully the iPad 2 and almost surely on eventual PC and Mac OS X version.
Incidentally, there currently is a native OS X version, too. It still not polished for the final user experience as it lacks the proper support for keyboard, mouse or whatever controller, but it's there and could be something for the Mac App Store.

Next on my list is improving explosions (possibly with actual flying debris), fix some things with the terrain and then move forward on the game play.. which is going to be simple, but it still requires work on balancing it.