Almost one year after the release, the Android sales for Final Freeway are finally improving !
The Android Market has improved a lot since I initially complained about it. In addition to the web interface  (as I noted in a previous post), it's now possible to set different prices for different currencies, to have well rounded numbers for every currency.

But the main difference in terms of visibility and sales was the introduction of the racing category. Since that, sales improved 5-10 times and we're now consistently selling  more than 20 copies per day. Which is not amazing, but certainly promising.

Here is a simple graph of the Google Checkout monthly payouts for Final Freeway for Android. 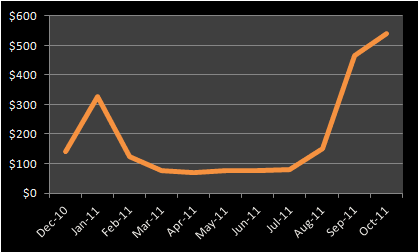 We released on the Android Market towards the end of December 2010 and reached a first sales peak in January. Probably mostly due to the fact that the game was a new release.
Sales then went flat for a while, and at that point we were pretty much disappointed.. until the racing category was introduced and the game started showing in there, floating between the 12th and 16th position.


I'm not sure how one does get to a fairly high position to start with. The game has not been featured on the Android Market front page, so no help there.. but it's a fairly popular game on iOS.
It also somewhat helped when I decided to try to put FF for iOS free for one day (I'll talk about this in a future post), because that gave a spike of visibility to the game in general. Two platforms can help each other's sales.

What about piracy? The 1.0 of FF for Android is still out there, but not the latest updates, where we put a little bit more effort into protection.
One nice thing about Android is that the protection scheme can somewhat be customized (more checks, etc.) and my guess is that any customization will throw off the "drive-by crackers" that will crack anything that is crackable with some default script.. but they won't put any effort into cracking a single game. At least not one that isn't hugely popular 8)
Let's just hope that it stays like that...

So, iOS remains the main platform, but future ports to Android seem to be more meaningful now.
We've also been considering moving to in-app purchases for Android. Putting on the market the game for free, but with most of the features and/or content to be unlocked with the in-app purchase system.
However it's possible that that won't make a big difference in actual sales.
The big business of in-app purchases seems to be around addiction and gambling schemes.. not simply making something free form the start and asking to pay a one-time fee later.
We're considering those things.. but it's not a sure bet. The big hope is still to have a better market and ideally being able to be featured on the Android Market's front page at least for future titles.. ..speaking of gambling ! eh !