15 months after the initial Android release of Final Freeway, the game is finally starting to pay off!

Last November I mentioned how the introduction of the racing games category, the web interface and to ability to setup even prices for each currency was helping the sales.

Things are even better now, since the opening of the Korean market.
In Korea gaming is obviously big and Android is big in Korea because of local brands such as Samsung and LG. The market, though, used to be closed to mobile games distributed by Android Market and App Store, because by law games had to go through an approval process that wasn't feasible for mobile apps (I'm guessing it wasn't feasible because of the sheer amount of work required by Apple and Google to have each game validated by whatever entity it had to go through).

For some reason this big barrier went away recently.. and that helped to get some extra sales, but didn't do as much until we translated the store description in Korean and rounded up the price to something that doesn't look like an automatic currency conversion.

Those two things (but mostly just the translation) gave quite a push to the sales.
I don't have a detailed report, because for some reason Google doesn't allow connecting its data feed to sites such as appFigures unless one is a US (and UK ?) developer (Thanks, Google !)..  ..but I can definitely tell that most of the purchases now come from Korea and that the monthly income has been on the rise.

Here's the graph again (it's from Yen converted to Dollars at the current rate, so it's slightly different from the previous graph, because the conversion rate was different at the time): 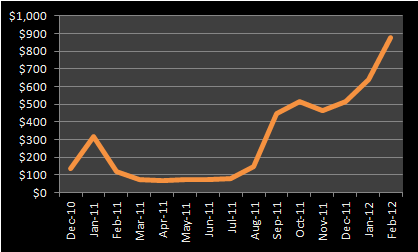 But before getting too excited.. it's worth nothing that this income has to be split between partners. And also the sales of FF and FC for iOS are slowing down.

Nevertheless, I'm pretty happy now that we made the effort to port FF to Android. Even if it took a while for sales to take off, it was a good investment. Also porting other games is now easier because much of the platform specific code doesn't need to be touched again for the foreseeable future.

Last but not least, 3 days ago I submitted the 1.0 of Final Freeway 2R to Apple. With some luck, it will be out by the second week of March.
I expect this new title to sell well.. and it will be interesting to see how it goes.
Can it sell as much as FF, or was that a lucky shot ? Is there still enough room on the App Store ?
We'll find out.. one thing I know for sure, this sequel is sensibly better than the first game.. and I have high hopes for it 8)