One month after the release of Final Freeway 2R (FF2) for iOS, it's time to pull some numbers and see how that went, also compared to the previous two games: Final Freeway (FF) and Fractal Combat (FC).

The short story is that the sales on App Store for us (Oyatsukai) have been getting worse with each new release.
Here are some graphs of the first month of sales for each of the games. 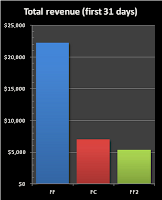 The blue bar is for FF, red for FC and green for FF2.

They are all Universal games. Meaning that they target both iPhone/iPod touch and iPad. 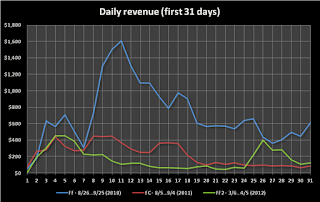 The daily graph is more interesting and it gives something to talk about.

FF release (blue line) was good on its own. Though dropping already by the 4th day, it received an additional boost on the 5th day, when Touch Arcade gave it a positive review. But it quickly dropped the day after.
At the time I also released an early bug fix (rushed update). As the update came up, Apple featured the game in the "New and Noteworthy" main section.
It's important to stress the fact that this feature was in the main section. This means that the game was featured on the first page of the suggested software (apps and games, not just games).

This gave a great boost to sales, making it top to day 11 to 2331 copies on that day alone.
Interestingly, the game wasn't visible in the racing games section then. I figured that it was just some mistake or a byproduct of placing the game with the featured apps. I definitely didn't feel like questioning that too much, at the risk of losing the prominent featured spot.

11 months later, we released Fractal Combat. That required quite a bit more work to develop, so, we initially set the game to $1.99. A review came from Touch Arcade, again on the 5th day.
The game got a respectable 3.5 stars, but the tone of the review was that of disappointment. In fact, there was no boost on sales due to that (though it may have been worse without, ..who knows).
FC received some good coverage in Italy and that was the major source of sales for the first few days.
I'm happy to sell in any country, however US market is the biggest market and it's ideal to have a decent rank there.
FC was featured by Apple, but this time around it was under the games section, not in the main section.
In my experience (see the next game, too), that kind of feature is better than nothing, but it's definitely not going to help to climb the ranks. You're dying, just not as quickly.

After a month we permanently reduced the price to $0.99, and 8 months on, it's now selling somewhat..  about 40 copies per day.

About 7 months after releasing FC, on March the 6th, we released FF2. This is FF how it was always meant to be. Better in every way, with proper pixel art, excellent sound tracks, and all of the features that were missing, plus some more.
"Everyone" loves it, great majority of 5-star ratings and only one 1-star rating from an hater on the loose, obviously!
We also tried crowd funding it with appbackr, in the hope that that would bring some increased visibility (and clearly to support the development economically, though at a 54% interest rate..).

Like with FC, FF2 was also featured in the games section, and again, that didn't help to climb the rankings. In fact, for the first month, this new game sold even less than the previous game.

I don't think that this can be pinned down to one specific reason. But I can imagine how things could have gone better.
Positive Touch Arcade reviews seem to always give a nice boost, especially in the US market. But TA was busy covering the GDC when the game came out.
After about 10 days, TA made a podcast praising FF2, but that didn't seem to affect sales at all.
On the 24th day we released an update of FF with a promotional link to FF2, and made it free for one day. Touch Arcade editors picked that up and finally reviewed FF2, again praising the game.
That gave a great boost, almost as good as the new release boost.. but it wasn't enough to catch enough momentum to stick high in the rankings.

So, maybe, if TA reviewed the game soon after its release, the sum of the release boost and of the positive review could have brought FF2 high enough in the rankings to catch momentum and possibly even to get Apple to feature it more prominently. Or Apple could have featured the game better, regardless of how quickly sales picked up on their own.
I'm not trying to lay any blame here, just trying to think what could have helped the game to sell more.

Maybe FF2 is not as interesting after all.. but after one month, the game is already below the first 200 racing games (iPhone US ranking). That means that there are over 200 racing games that are faring better in some way..  even FF has a higher rank than its sequel (FF is selling somewhat less, but its positive history may be helping it in the ranking).

What I think I learned from all this is that it's basically just chaos (another name for "luck"). If you ask someone how he/she managed to strike luck on the App Store, that person will most likely tell you that they didn't know how that happened and that they didn't do anything special.

In general, I also just see too much competition (120 new games per day ?!).
In a different time, a game like FF2, priced at $0.99, would have been unmissable. Now it's just another game that has to struggle to make up the development costs. Of course one could raise the price, but nowadays it's very hard to try to sell anything for more than $0.99 on mobile.

A positive thing is that we've been fairly lucky in the long term. FF is still selling in decent numbers after one year and a half. FF2 may continue to sell poorly, but steadily, and that would be great. It may also find new popularity at some point, though that's unlikely.

Another positive note is that Google's Android market has improved a lot in the past year.. and all hopes now are for FF2 to get some attention at least on the Android side.
Of course, things on Android are even more confusing. There is no Touch Arcade equivalent and it's anyone's guess if and how one can get featured on Google Play (the new name of Android Market).

I honestly don't like any of this. I don't like to have to think in terms of getting millions of people to buy my games and I especially don't like the randomness of it all. It seems like there isn't a proportional gain on the effort that one puts into a title.
I'm not saying that one should give up on making quality games.. but rather that quality is necessary but not sufficient, and economic success is nothing but luck. All you have to do is to stay afloat and wait for the day when all the planets will be aligned just right.. but I don't see that happening on the App Store for me now..